Lost Vape Thelema Pod Mod Review: Is It Worth Getting?

Lost Vape are known for their use of Evolv’s DNA chip in box mods such as the Paranormal and Centaurus, as well as throwing them in their Orion and Orion Plus pod kits. This has meant Lost Vape’s products have usually been a little on the pricier side.

Developing their own proprietary chip, the Quest, has meant Lost Vape have released a number of pod devices with more reasonable price tags. The Quest chip is also starting to make its way into some Lost Vape box mods, firstly with the B2B starter kit and now with the soon to be released Grus mod.

The Thelema is a pod mod powered by their Quest chip, which features an internal 3000mAh battery and can fire up to 80W.

Let’s take a look at the Thelema.

The Lost Vape Thelema is constructed from zinc alloy and has a leather cushion which wraps around the curved back of the body.

You can choose from three different colors; Stainless Steel, Black and Gunmetal. You can also choose which leather finish you want on the cushion; Ukiran Leather, Glossy Leather or Grain Leather. The leather comes in different colors depending on which metal finish you choose. Lost Vape do say the leather is real, too. It’s a nice touch to let you choose both the metal and leather finishes.

The Thelema is very nice to hold in the hand and the leather cushion provides a very comfortable grip. It’s quite lightweight, too, but still feels like a solid and well built device.

There are two engraved panels that run down each side of the Thelema, one has Lost Vape engraved and the other has Thelema. It looks sleek; sometimes branding can look tacky but this is done well.

Above each panel are the airflow slots which are cut diagonally into the body of the device.

On the bottom of the Thelema are the usual regulatory marks and some battery venting holes.

The top of the Thelema has a recess where the pod fits into. In the recess are two gold plated contact pins and four magnets, which secure the pod in place. The magnets are not the strongest I’ve seen, but do a fine job of securing the pod in place.

On the front of the Thelema, at the top, there is a little cut out which allows you to see the liquid level in the pod. I did find it quite difficult to see and just opted to lift the pod out to check my liquid level.

Overall, the build quality on the Thelema is exceptional. The body of the device is lovely to hold, the leather cushion is comfortable, it feels solid and well made, the screen is crisp and clear, the buttons are nice to press and are responsive in use. It looks good as well, sleek and stylish with curves and angles complementing each other very well. 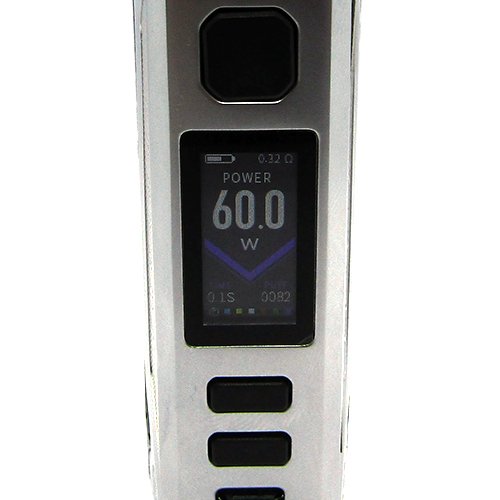 The Thelema is powered by Lost Vape’s Quest chip and is capable of firing between 5-80W.

It only features a variable wattage mode, so is very simple to use; no complex menu systems or various power modes make it a device that is suited to both beginners and more experienced vapers who want a more streamlined vaping experience on the go.

Selecting your desired wattage is done using the up and down adjustment buttons and then you use the fire button when you want to take a draw.

The display is a 0.96” TFT screen in full color and the color scheme can be changed between any of the six available options; Blue, Yellow, White, Red, Green or Purple.

There is a battery indicator in the top left of the display and the resistance of your coil in the top right. In the middle it displays your selected wattage as a nice big number, then you have the time in seconds of your last puff in the bottom left of the screen and a puff counter in the bottom right. There are also color indicators at the very bottom showing you which color scheme you have selected and the others available.

The display itself is bright, vibrant and crisp, while keeping all of the information easily visible at a glance.

The fire button and adjustment buttons are very nice to use; clicky and responsive, but not cheap feeling at all. These are actually the nicest buttons I’ve pressed on any vaping device.

The Thelema has an internal 3000mAh battery, which is a great capacity to see on a pod device. You should be able to get a full day’s use out of the battery, but if you do need to charge during the day this is done using the USB Type-C port.

The Thelema supports 2A charging and Lost Vape say it will be fully charged in approximately 60 minutes. My math says it will take about 90 minutes to charge at 2A and in reality I measured it to be approximately 100 minutes. 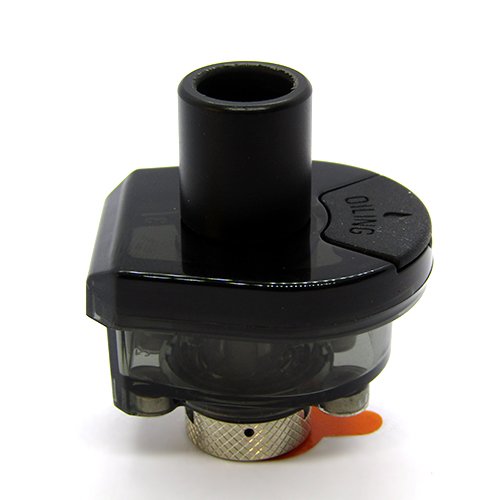 The pod is constructed from PCTG and is very darkly tinted on the top. The lower portion of the pod is more lightly tinted, allowing you to see your liquid level more clearly.

You have an option of two 510 drip tips in the box, one thinner and one thicker. Both of the drip tips fit nicely into the top of the pod and are secured by two o-rings. The thinner drip tip has a glossy finish, while the thicker one has a matte finish. While the thicker drip tip has a wider bore and is more suited to direct lung vaping, you can still use the thinner one for direct lung vaping too, so it’s a matter of which you prefer to use.

The fill port is big enough for standard sized nozzles and is covered with a rubber bung, which is quite chunky. The sample version that I received has the word ‘Oiling’ on the rubber bung. Lost Vape has advised that this was a mistranslation and it has been changed to ‘Open’ on the final production models. 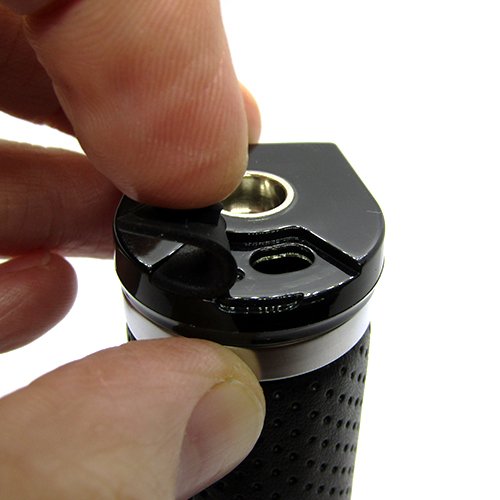 The bottom of the pod is where your coils are installed and they are press fit, so it’s quick and easy to remove and replace your coil when needed. You can change the coil while you have liquid in the pod too, so no need to finish the liquid with a spent coil or dump the juice.

There is an airflow control ring which is attached to the bottom of the installed coil. This is reusable, so you swap it onto your new coil when changing a coil. Don’t throw it away with the old coil. The airflow control ring lets you dial in your preferred airflow via two cyclops airflow slots and there is also a single hole if you want to restrict the airflow down to a mouth to lung draw.

The Thelema comes with two coils included in the box: 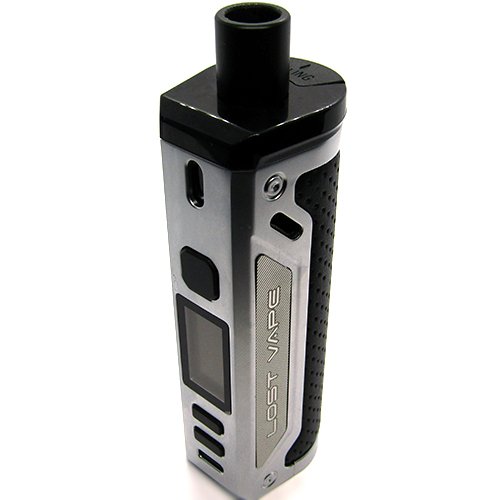 Overall, the Lost Vape Thelema is a very nice pod mod. The internal battery has a great capacity, there is a nice selection of coils available ranging from DL to MTL, along with an RBA coil option if you prefer.

The mod itself looks great, feels great, has exception build quality and to top it off it’s really simple to use.

The only negative points I can think of is that it’s a little difficult to see your liquid level in the pod through the little cut out window.

The overall size of the Thelema is slightly larger than some other pod mod devices, which is a small trade off for having the large capacity internal battery. It still fits in the hand lovely and maintains a nice, holdable weight.

Lost Vape Grus Review – A Diamond In the Grus?
Scroll to top