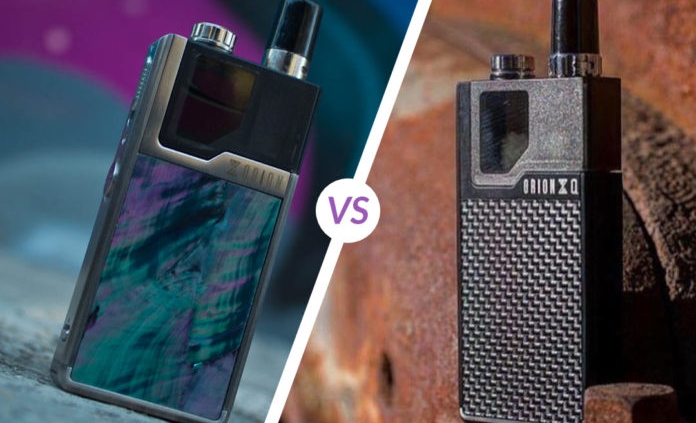 It had many admirers, including the whole Vaping Vibe team. Yet it was still quite a divisive device with many stating the hype wasn’t worth it, and it was just overkill for a pod mod that came with a high price tag.

Lost Vape made the most logical step for their latest release. The Orion Quest (or Q) is a stripped back version of the Lost Vape Orion which uses a simple wattage board instead of the DNA Go by Evolv.

That means it comes in at a far more palatable price even though it has the same design and build quality.

But does the lack of fancy features like Replay mode, mean that the Orion Q is an inferior device? And which one ultimately provides the best value and is the best option for you?

Decisions are based on all the Vaping Vibe team picking their favorite for each category.

As sibling rivalries go, this one could seem a bit unfair at first glance. It’s like the fully grown man going in to fight his pre-teen younger brother.

However, that’s not really the case. The Orion Q may lack the clever internals of the Orion Go, but that doesn’t necessarily make it an inferior device. In fact, it makes it a far more approachable and affordable device for the average vaper, and that’s already a massive win.

However, let’s break down the bare facts to see if it’s worth spending twice the amount for the DNA Go.

When it comes to design and build quality, you can’t really tell these two devices apart. The lack of a replay button on the Q means the micro-USB is in a far better position, instead of tucked away behind an annoying flap. Although some may prefer the cleaner look of the DNA Go, the Q’s layout just feels more practical.

When it comes to pods, the Orion Quest comes with the same style pod, but it’s a 1.0-Ohm Kanthal coil. We also noticed that these pods don’t quite fit as seamlessly to the Q as the pods on the DNA Go. We won’t count this against the device, and it is only a small gap, but it’s something to bear in mind.

Battery life is a hard one to gauge as it really depends on the resistance of the coil you are using on the device. That being said we used the 0.5-Ohm stainless steel coil on both the Q and the DNA Go and didn’t notice any notable difference. However, playing with your power features in Escribe on the DNA Go will give you more scope.

It’s also worth noting that you do have the ability to use the 1.0 Kanthal pods on the Lost Vape DNA Go if you go into Escribe and set it up. So if your main deciding factor was to use the higher resistance coil, the DNA Go does give you the choice, even though it’s not the most straightforward method.

So what about performance?

Well, there’s no denying that having the replay feature and the ability to control the ‘warmth’ and ‘boost’ of your vape through Escribe does give you a far more tailored experience, and ultimately better performance.

That being said the primary day to day experience and general performance actually comes down to the pods you are using on the device, and even though Lost Vape has updated the pods, they are still quite inconsistent.

If your only reason for getting an Orion was to use it in a DTL setup, then the 0.25-Ohm coils (although power hungry) are your best bet, and those will only work on the DNA Go.

However, when it comes to MTL vaping the Q holds it’s own with either of the other coils. The lack of power features doesn’t impact the vape experience enough to justify the extra price of the DNA GO.

So you have to ask yourself the question of what are you buying the device for?

If the ability to control your power setting, temperature control through Replay mode and have more variation on pods (giving you better scope for DTL or MTL vaping) is important to you. Then the DNA Go is more versatile and ultimately the better choice between the two Orions – if it’s in your budget.

But if you are just looking for a stylish pocket-friendly device to use with simple plug-and-play features. Then there’s no question that the Orion Q is the more sensible choice.

Lost Vape Orion Q Review | Half the Price of the GO